For the week of Christmas, we traveled by ferry over to the Greek island of Rhodes. Coming from the 99.9% Muslim Turkey, it was surprisingly sweet to hear Christmas carols in the grocery, to watch twinkling lights, and to see people wearing reindeer headbands and Santa hats. Similar to our experience in Turkey, Rhodes is in off-season mode with the tourist traps shut down and locals running all over the place.

Beside obviously being neighbors, Turkey and Greece share quite a history. In ancient times people moved back and forth, with many ancient Greek cities built in what is now Turkey. After the Greco-Turkish war ended, a population exchange took place in 1923. The idea was to concentrate all Muslims on Turkish soil and all Christians on Greek soil. It is estimated some two million people were forced from their homes and made refugees. 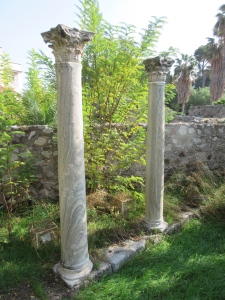 On the way to and from Rhodes we stopped on the island of Kos. Right in town are very well laid out Hellinistic, Roman, and medieval buildings and ruins. We wandered through the agora, looked at mosaic floors and marble columns, explored the Crusaders castle, and walked the docks at the marina between ferries. Outside the town of Kos is the Asclepeion where Hippocrates first practiced medicine. In Kos town, we spent a few minutes under the tree where legend has it that Hippocrates taught his students the art of medicine. 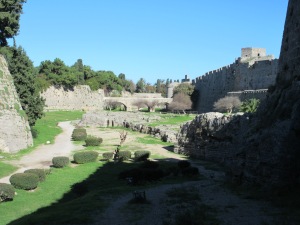 The moat around Rhodes. Today it is a frequent walking and jogging path.

Rhodes is a UNESCO world heritage site. The medieval walled city is very large and in good shape. Apparently a few thousand people live inside the walls. Some business were still open but it was mostly closed up due to tourist season being over. We spent hours wandering the cobbled lanes, enjoying the bougainvillea and stonework. The Palace of the Grand Master is a central castle built by the St. John’s Knights within the walled city and today serves a museum.

The beach from which we swam on Christmas Day, despite the grey clouds.

On Christmas Day, we swam in the Mediterranean. It was cold but not so cold we couldn’t spend about 20 minutes swimming around and making bubbles. Nor were we the only ones in the water. All the beaches in Rhodes appear to be set up for year-round swimmers with changing stalls, benches, hooks, and fresh-water showers. Luckily, the black hose leading to the shower provided warm water despite the overcast day. Even on a day when we felt frozen by strong wind, the distant Turkish mountains were capped in fresh snow, and the waves were a meter high, there were people swimming in the sea! 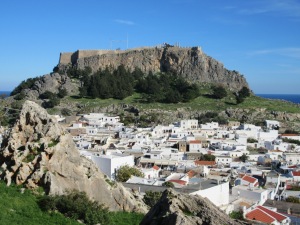 Lindos town and the fortified acropolis.

One day we took the public bus down to the town of Lindos. An elaborate temple to Athena sat on the steep hill above town, with construction completed about 300 BC. Later, the Greeks, Romans, and Byzantines added to the hill-top sanctuary. Later still, the Crusaders and then Ottomans turned it into a fortress. The modern-day town of Lindos is one of the most picturesque things you can imagine, but was seemingly vacant. One restaurant and one small mini-market were open, all else was shuttered for the season. It was full of beautiful white homes closed up.

Entrance to the Temple to Athena above Lindos.

A few months ago we heard about a documentary called The Venice Syndrome. Apparently, Venice has as many residents today as it did after the Great Plague in 1438. The cost of living is so high, the city has become uninhabitable. Extreme tourist pressure means hundreds of locals leave every year. We wondered if perhaps the same is happening in Lindos. Nearly every building had an English sign up for hotel, apartment, hostel, pension, or room—indications that they had converted these old stone homes to compact rental accommodation for tourists. What is the fate of locals here? Especially those on the low end of the economic scale? A taxi driver told us the year-round population of the island is 115,000 and it swells to half a million in the summer with tourists. Certainly, Greeks welcome tourist income but, at what cost?

A stormy day at a Rhodes beach with snow on the Turkish mountains.

See more pictures from Rhodes and Kos in the Greek Island photo album here. You can also check out where Rhodes is on the map. 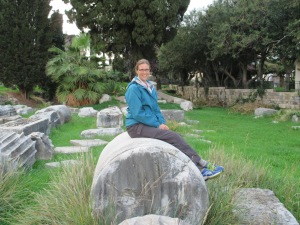 Many of the columns in ancient Agora were enormous. Megan’s rides side saddle on the one for scale. 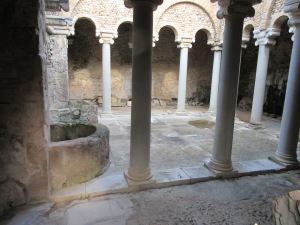 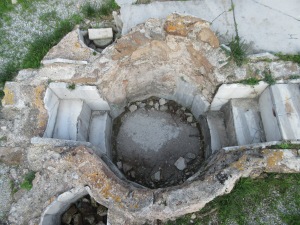 Even the Greeks “put a bird on it” in this mosaic floor. Ancient Agora on Kos. 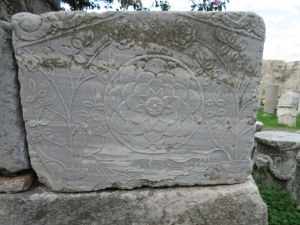 Early recycling. Thirteen gorgeous columns placed in their weakest position with this reuse.

Symi, a picturesque Greek island as seen from the ferry.

One of the entrances to the medieval walled city of Rhodes.

This is the entrance to the old harbor on Rhodes. Legend has it that Helios stood with one leg on either side of the entrance as the Colossos of Rhodes, one of the Seven Wonders of the Ancient World. 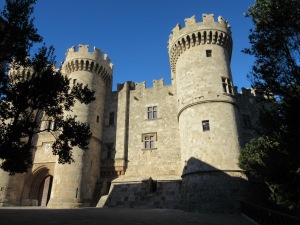 Palace of the Grand Master.

Inside the Palace of the Grand Master. 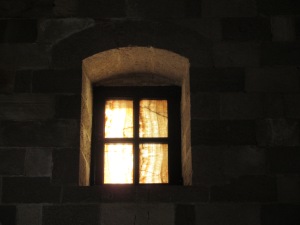 Many of the small windows in the Palace of the Grand Master are made from stone instead of glass. 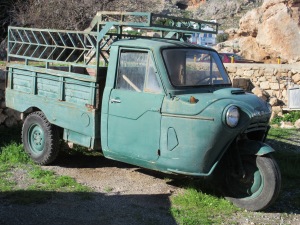 Lindos town and the fortified acropolis. 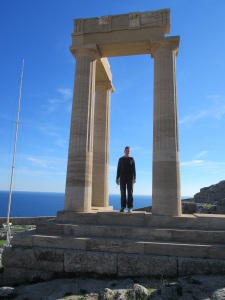 Megan among the columns above Lindos.

Bike for a very small man. 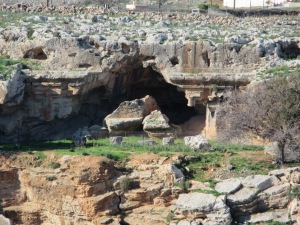 A Hellenistic funerary monument above Lindos. The rocks at the cave entrance were carved. Unfortunately the roof fell in long ago.

On the Greek islands we visited cobbles are made from river stones turned on their sides. If you look closely, you can see many of these stones are worn flat on the upper edge.

The Rhodes moat. These granite balls were fired from mortars short-range out of the moat at encroaching attackers.

Olive trees get pruned for decades to keep all the limbs in easy reach. Over time, you get fat gnarled trunks on what look like small trees. 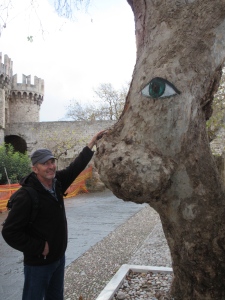 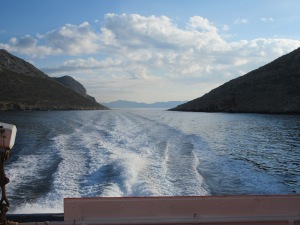 Our ferry passed through this narrow gap at over 30 mph. The small speck on the right side is a fishing boat!