Parts of the Bodrum Peninsula have not been developed and are rugged. The mountains in the distance are on Greek islands. 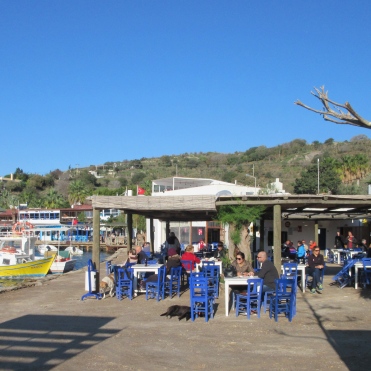 The busy municipal cafe in Gümüslük. Midday midweek off-season, it is busy with locals. Many of these cafes had people playing Rummikub or backgammon. 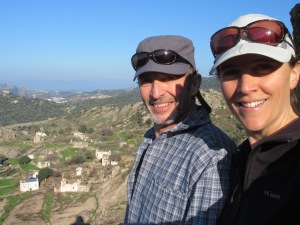 Us up on a rocky promontory overlooking abandoned Sandima.

In addition to our trip to Ephesus, we explored the greater Bodrum peninsula. The entire peninsula is a tourist destination for Turks and Europeans. Many people return to the same resort every summer. The Istanbul jet-set fly down for the weekend to escape the city bustle and winter weather. Despite this, some of the communities outside Bodrum have retained their small town flavor. With the excellent public transit system, we were able to take day trips to every corner. The coastline is rugged in places and views of the Aegean and Greek Islands are everywhere. 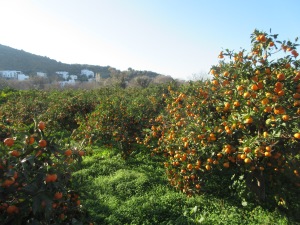 Citrus season! You can buy a 2 pounds of these guys for less than a dollar!

One afternoon we discovered a fun juxtaposition, the towns of Yalikavak and Sandima. Yalikivak seems to have embraced wealthy yachters. We walked by fancy shops, art galleries, fashionistas, and a large marina for mega yachts. A short walk from the strip is a thriving community with many gardens and orange groves. Providing quite a contrast, Sandima is an abandoned village above Yalikivak. It is a 30 minute walk from from downtown. Stone houses stand silently in various states of disintegration. Very few have roofs, most have lost part of a wall. The orange, pomegranate, and olive trees are reminders of habitation. The houses are scattered on either side of a gentle valley, full of grazing goats and small caves. 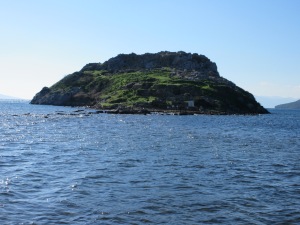 Part of the ancient Greek city Myndos. This island is covered with ruins and connected to the mainland at low tide by an ancient causeway.

One of our last discoveries in Bodrum was the maritime museum with a fantastic display of model ships and the most astonishing collection of seashells I’ve ever seen. There are about 5000 of them. Some looked like candies, some like punk jewelry, some like galaxies, and some beyond description. Bodrum and the nearby Greek Islands were a center for sponge diving. Early commercial divers tied a slab of marble around their necks and used it both as a weight and hydroplane to steer their dive. As new technology came along, divers could go deeper and longer but they did not understand decompression sickness, or “the bends.” They estimate that 20,000 divers suffered debilitating injuries and 10,000 died from ascending too quickly  before sponge diving was banned. Apparently it was Mediterranean women who put up enough of a fight for it to end; they didn’t want to lose any more of their sons, brothers, or husbands.

You can see all our pictures from Bodrum here if you wish to see more.

Abandoned village of Sandima on the Bodrum Peninsula. 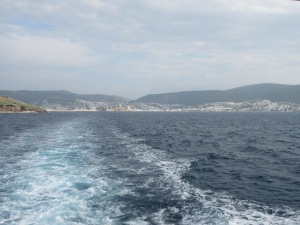 Bodrum receding as we take a ferry to the Greek Island of Kos. 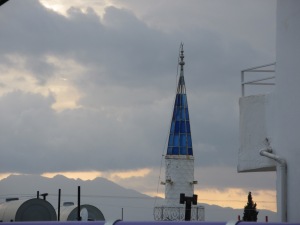 The minarets around the Bodrum Peninsula are mostly topped with blue glass. 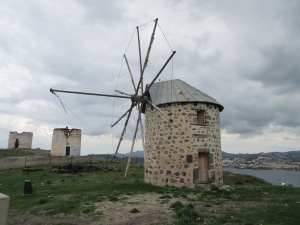 Windmills are all around the Bodrum Peninsula. They were used from the 18th century up to the 1970s to mill flour. Most are falling down today. 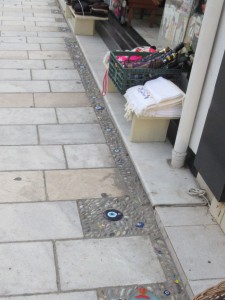 The blue eye amulets, called nazar, are everywhere and often built into walls and sidewalks. It is believed to provide protection from the Evil Eye and likely dates back to the 16th century BC when glasswork developed. 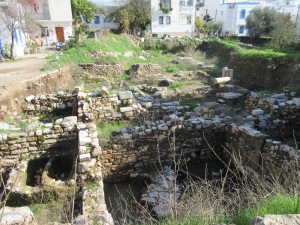 Down a neighborhood street we came across these seemingly random ruins. We hear that most building projects uncover things like this. 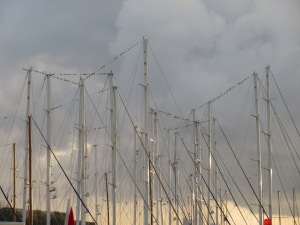 Birds on the rigging, Bodrum Harbor. 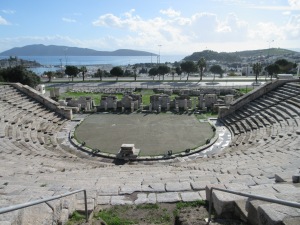 The ancient Greek theater in Bodrum. 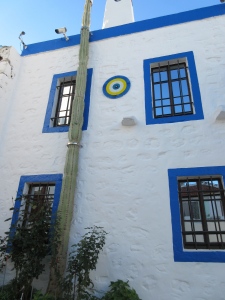 A typical Bodrum house with blue trim, white walls, and protection from the evil eye. Note the extremely tall cactus!