Upon leaving Dublin, we spent a weekend in London. Due to bad colds, sightseeing was severely limited. However, we did rally one day to spend a few hours in the British Museum. This museum houses many prize gems taken from the ancient sites we’d seen in the previous few months. It is an exceptional museum and we easily could have spent several days there. 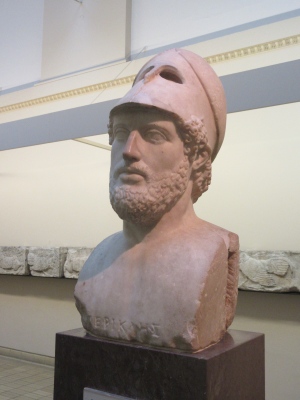 Perikles, 429BC, Greek Citizen-Soldier. At ease with his helmet back. British Museum. 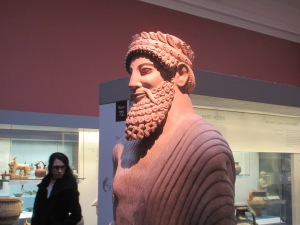 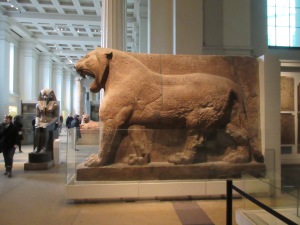 Then began our slow journey back to the Americas. Having decided to take a non-traditional route, we found cheap tickets on a cruise ship crossing the Atlantic. We expected this would be an easier way to physically adjust to the changes in time zones and mentally adjust to returning home. 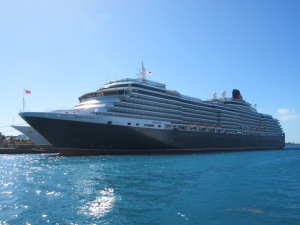 Our boat docked in Nassau.

We sailed with the Cunard Line, who is celebrating 175 years of cruising. Our ship was the Queen Victoria and she’s a big one at 964.5 feet long, 106 feet wide, 15 levels, and 90,000 gross tonnes. She is a Panamax, which means the largest a vessel can be and still fit through the Panama canal. A loop around the deck is a third of a mile. On board there is capacity for 1,988 passengers and 980 crew. There are six galleys to feed everyone. Every day the ship’s crew provided about 40-50 events for passengers ranging from games to fencing lessons to lectures to pastry demos to concerts. We had a large stateroom with a private balcony. This room turned out to be bigger than some of our recently rented studio apartments! 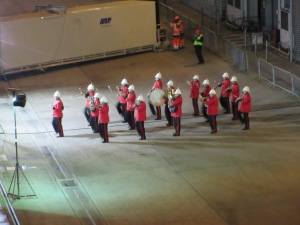 Amid light snow flurries, this marching band played as we pulled away from the dock in Southampton.

We cast off from Southampton, England in the evening amid light snow flurries and a marching band performing on the dock. It felt quite royal. Most of the other passengers were from the British Isles and retired. There were very few children on board. We were pleasantly surprised by how sweet, quiet, and easy-going the other passengers were. Our first few days were a bit rough due to a storm. Our ship has stabilizer fins which cut out about 90% of the side-to-side rolling, but she still moved around in the larger swells and strong winds. 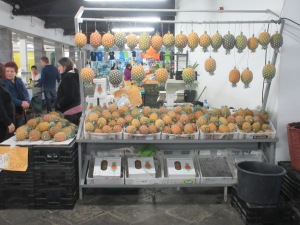 The Azores are renown for their pineapples, we found this great display in the daily farmer’s market.

After two days at sea, we came to Ponta Delgada in the Azores. The Azores are part of Portugal. Despite being so far North, they have a very temperate climate and therefore can grow many sub-tropical plants. Pineapples are a significant export crop. We walked around town, explored a few parks, and watched at least a dozen people swimming in a sheltered bay (January in the northern Atlantic!). Wandering through the farmers’ market made us long for our own kitchen, although the food on board was excellent. 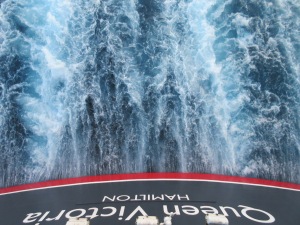 As we continued south and east, the weather significantly warmed. Soon the upper decks were covered with sunbathers. It took five days to reach the Caribbean, where we stopped in Antigua, the British Virgin Islands (at the very harbor where Plan B tour began last March), and Nassau. After days of not seeing other boats at sea, it was a shock to find ourselves parked with 2-4 other cruise ships at the same small island. We learned that Queen Victoria intentionally has less passengers per square foot. Despite being larger in size than most of our neighbor ships, she had about half the number of people on board! We felt lucky to have happened upon a low-key, high-class, non-party-atmosphere ship. As these other boats cranked loud dance music from their top deck, we wished them farewell. 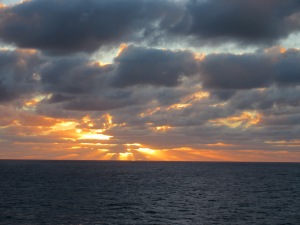 One of the many striking sunsets at sea.

Our Caribbean ports of call seemed unremarkable to us, after so many glories in Europe. The color of the water and the sky were amazing. The settlements were not exactly attractive or appealing. Many of the islands are flat. We walked around each town, sat on the beach, read our books. Experience said the best parts were to be found underwater and we didn’t pay for any excursions, so we bypassed them this time.

We disembarked Queen Victoria in Fort Lauderdale. From there the ship continues through the Caribbean and then the Panama Canal headed to San Francisco. In Florida we will visit with Jim’s mother, plan what comes next for us, and ease back into being in the US again.

Additional pictures from the British Museum and our crossing can be found below or in the gallery. 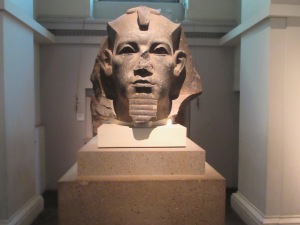 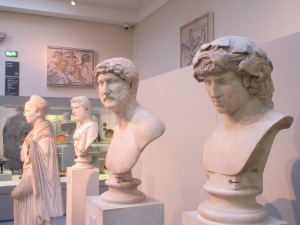 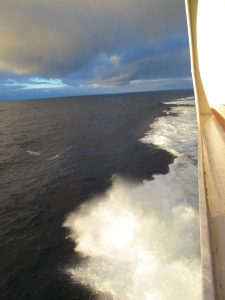 Our average speed was between 15-22 knots. 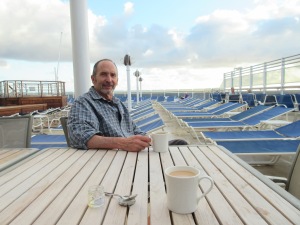 Jim enjoys his coffee and Megan her tea while supervising the deck chairs. 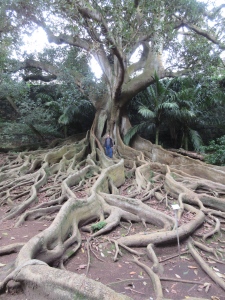 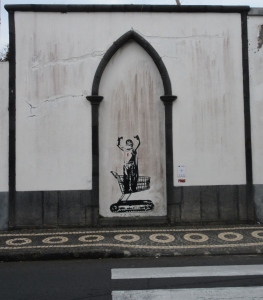 Some Banksy-inspired graffiti in the Azores, above characteristic black and white mosaic sidewalks. 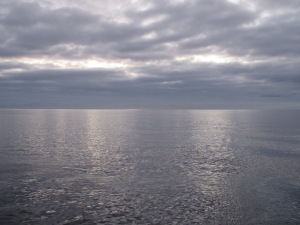 We found calm seas in the Horse Latitudes.