Put your cursor on a photo to read the caption or click on one picture to see a larger version of it with caption. Once you click on one, you can scroll through them all.

Many of the columns in ancient Agora were enormous. Megan’s rides side saddle on the one for scale.

Even the Greeks “put a bird on it” in this mosaic floor. Ancient Agora on Kos.

Early recycling. Thirteen gorgeous columns placed in their weakest position with this reuse.

Symi, a picturesque Greek island as seen from the ferry. 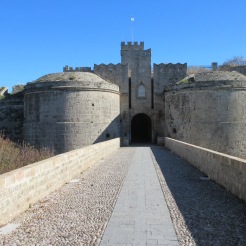 One of the entrances to the medieval walled city of Rhodes.

This is the entrance to the old harbor on Rhodes. Legend has it that Helios stood with one leg on either side of the entrance as the Colossos of Rhodes, one of the Seven Wonders of the Ancient World. 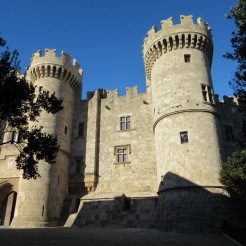 Palace of the Grand Master.

Inside the Palace of the Grand Master.

Many of the small windows in the Palace of the Grand Master are made from stone instead of glass. 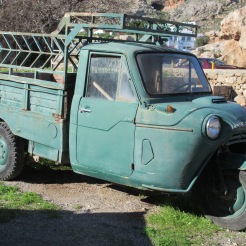 Scenic Lindos fills the narrow valley with white square houses. The great majority of the town looked shuttered for the winter.

Megan among the columns above Lindos. 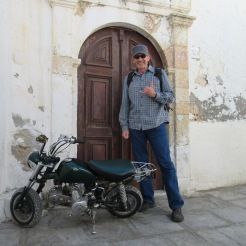 Bike for a very small man.

A Hellenistic funerary monument above Lindos. The rocks at the cave entrance were carved. Unfortunately the roof fell in long ago.

On the Greek islands we visited cobbles are made from river stones turned on their sides. If you look closely, you can see many of these stones are worn flat on the upper edge.

The Rhodes moat. These granite balls were fired from mortars short-range out of the moat at encroaching attackers.

Olive trees get pruned for decades to keep all the limbs in easy reach. Over time, you get fat gnarled trunks on what look like small trees.

Our ferry passed through this narrow gap at over 30 mph. The small speck on the right side is a fishing boat!