Click on a picture to see a larger version of it with captions. Once it is enlarged, you can scroll through the set. New photos have been added to the bottom. 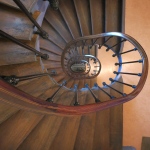 Beautiful inside stairwell at our first apartment. 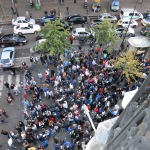 Black market view from our balcony

Police raiding the black market. Note the officer with the dog and the line of men detained up against the wall on the right. Also notice how the large crowd is gone! 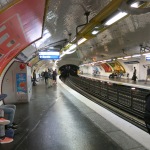 A typical clean, well-lit subway stop. The stations are so close together in some places, you can see down the tracks to the light of the next station. 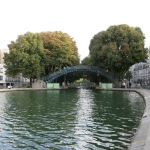 Beautiful public art work like this is everywhere you go. 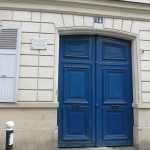 As the plaque on this wall says, Vincent Van Gogh lived in this building with his brother. 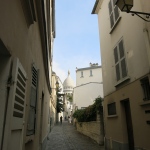 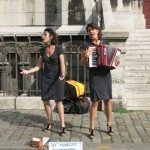 Very fun buskers outside Sacre Coeur. They were singing harmony and hamming it up. 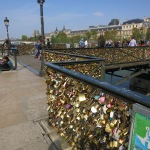 “Love” locks have taken over bridges in Paris. The weight of all these locks is causing structural problems and the city has to cut them down and is replacing the wire with glass panels.

Eiffel Tower. Up close, Megan thought it was surprisingly ugly, except for this arched filigree.

Looking up the center of the Eiffel Tower from underneath.

Many small streets are blocked from traffic, forming pedestrian malls. 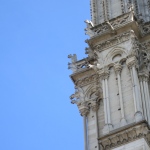 St Denis is the headless guy. The legend says he was decapitated, picked up his head, and walked 10k while preaching before he died. 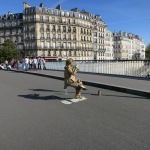 A busy street in the Latin Quarter. By “Latin,” they don’t mean Hispanic but actually the dead language Latin because the area was full of academic nerds back in the day, speaking Latin! 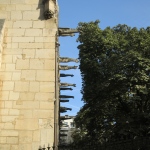 Over the top Gothic architecture in Église Saint-Séverin.

The “shadows” on this wall are a mural; another great example of public art in Paris.

Look for the woman doing two things Parisians do well: reading and smoking. 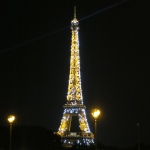 Eiffel Tower at night. At the top of the hour, it glitters. 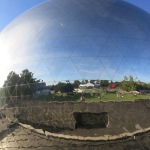 Megan’s favorite public art: La Géode. Can you see us waving at you? 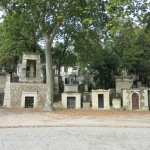 Cimetiere du Père Lachaise has over one million interned. It is a couple blocks from our apartment.

One of many the moving monuments at Cimetiere du Père Lachaise. This is one of several for the Holocaust. 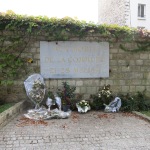 A revolutionist socialist group ruled Paris briefly in 1871, until they were defeated by the government. The final 200 retreated to the cemetery and lost a battle there. Those who survived the battle were executed at this site. 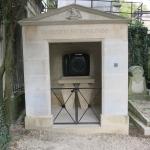 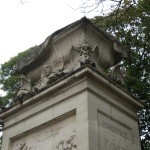 For centuries, children have pushed sailboats around in this fountain.

Fantastic architectural details are everywhere you look, even straight up.

Why we love French bakeries.

This subway stop is modeled after a Jules Verne submarine. Note the wedding photo shoot on the opposite platform.

Water canons and a large fountain at the Jardin Trocadero.

Behavior guidelines posted on top of the Arc de Triomphe. The French really love their speedos!

Louvre. Striking tile work from the ancient Near East, in the area of modern day Iran.

Venus de Milo, the original boobelisk, as seen at the Louvre.

Louvre. Despite all the people and many pieces of art, the galleries were easy to get around in.

With her dark hair and enigmatic smile, this woman moves through a crowd focused on some famous painting.

This newer building is successful in fitting in with the general aesthetic of the neighborhood. We saw some ugly 1960-1970 construction, but more buildings like this that are beautiful while being modern.

This traffic circle and statue stands at the location of the Bastille Fortress/Prison, that was torn down at the end of the French Revolution by the revolutionaries.

Megan will gladly tell you about the time she spent at the Sorbonne……….

We saw many insect habitats scattered around the city, mostly in parks.

When Haussmann was tasked with cleaning up Paris, he constructed many large straight avenues and determined buildings should have continuity across blocks with external balconies on the same floors. 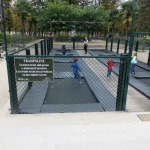 One of the many park attractions for children, this one in the large Jardin Tuileries, near the Louvre.

Inside the sarcophagus are four other sarcophagi and then Napoleon Bonaparte’s ashes.

At the French Military Museum, we saw this in the WWII exhibit. It is a ‘Welbike’ folding motorcycle in its parachute-drop container. Stamped on the engine cover was ‘Villiers Junior.’ 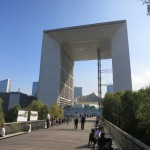 La Défense is a planned high-rise center on the edge of Paris. This enormous arch houses office space for 30,000 workers and caps the other end of a road from the Arc de Triomphe. 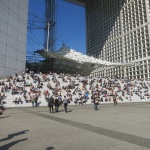 Business lunch crowd on the steps of La Défense arch. The parabolic object in the center is a wind deflector.

Public art giving itself a thumbs up.

Parisians love to eat outside. Sidewalk seating is often full with people enjoying a leisurely meal or cup of coffee. Note the graffiti on the do-not-enter sign.

Jim picking up some pastries at a local patisserie. Does that really say ‘Saint James’ in the upper right? 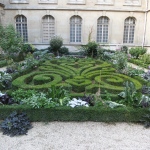 A manicured garden in the Carnavalet Museum.

Basement at the Petit Palais