Roll your cursor over a picture to see the caption, click on it to expand.

This stone tower once stood at a monastery that no longer exists. It was sacked by Vikings long ago.

Part of the Dublin Castle.

An unusual statue of Justice at the Dublin castle. A local pointed out to us that Justice faces the castle with her back to the people, her sword is unsheathed and raised, and she is not blind-folded. 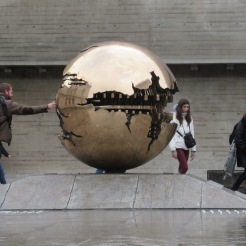 A kinetic sculpture rotating on the Trinity College Campus.

View from our balcony over Temple Bar. Sinead O’Connor worked as a waitress in the building on the right before her music career took off.

Daily morning delivery in the Temple Bar district. The Guinness truck is bigger. 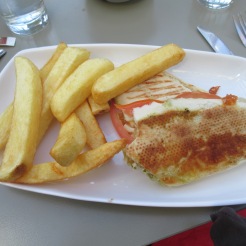 Is this sandwich small or are the fries large? Only my stomach knows for sure.

In the last few decades, Loyalists planted a bomb in the base of this tower destroying its staircase. The tower is a memorial for Daniel O’Connell. Glasnevin Cemetery.

Glasnevin Cemetery is well cared for today. The blue tags indicate they have been repaired and restored.

Grave of Arthur Griffith, first president of the Irish Free State and founder of Sinn Féin. 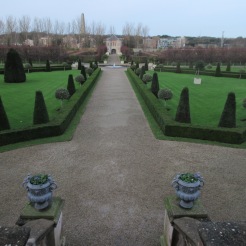 Formal English garden outside the Museum of Modern Art. 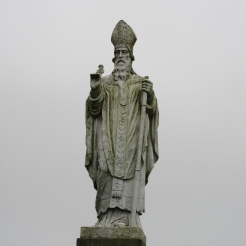 St. Patrick with his clover. This Brit not only brought Christianity to Ireland but also the Latin script and thus Ireland’s first written language.

Hill of Tara in the sideways rain. 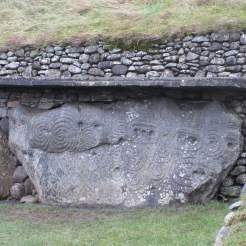 A carved stone at Newgrange. The meanings of these shapes are completely unknown.

This tree and bench have been friends for a long time. They have become quite attached to each other.

An artist sketching at The National Gallery.

The Eye of Ireland island, as seen from Howth.

Lighthouse at the tip of the rugged Howth Peninsula.

A public art project as seen out our window above Temple Bar Square. 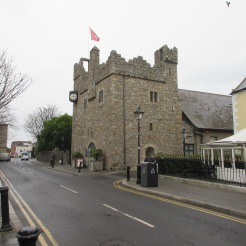