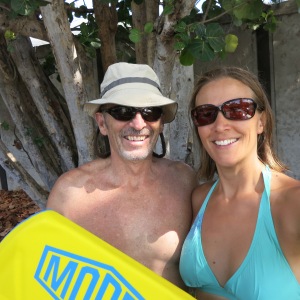 An afternoon of boogie boarding at our local beach

Regarding what we call ‘Jim’s Little Problem’ or ‘Megan’s Big Problem,’ Jim was discharged from the hospital a couple days ago and is doing quite well. The surgeon fixed his mitral valve by removing excess tissue from one of the leaflets and inserting a stabilizing ring around the valve. Post-surgery Jim did experience, like many after heart surgery, some atrial fibrillation but that has responded well to medication and will likely not appear again. One of the doctor’s largest concerns with all heart surgery patients is lung capacity; in order to get at the heart for surgery, they have to deflate your lungs. After surgery, they spend as much time listening to and watching the lungs as they do the heart. Patients can be at risk of pneumonia, lung damage, and breathing problems. Jim had some fluid in his lungs that has cleared and likely was caused by a small puncture to the lung during surgery. Using an incentive spirometer to measure lung capacity, Jim had no problem hitting 4500 mL before surgery; the device tops out at 5000 mL. A few hours after surgery, Jim was able to get 1500 mL (more than the nurses expected) and has been steadily increasing that; today is able to get 2750mL and improving at a daily rate of 250 mL. Every day, he gains back more strength and energy as well. He has few small incisions and an impressive collection of bruises to show from the experience.

Downtown Tampa as seen from our hotel room. The Convention Center, in the foreground, was modeled after a sternwheeler.

Prior to Jim’s surgery, we took one more sightseeing trip in Florida, across the state to the Gulf Coast. We hopped on the Amtrak and got off in Tampa. We didn’t know anything about Tampa before arriving and were pleasantly surprised. Downtown Tampa has a beautiful skyline and is very clean, compact, with a lot of cultural sights, public art, and parks. Tampa’s economy was built upon trade with Cuba. After the embargo, the city set itself up to be a financial capital and now has national and regional headquarters for many banks. We enjoyed the unique architecture and an excellent exhibit on Poseidon at the Museum of Art. We took a harbor tour where we not only enjoyed excellent views but learned a lot about the history and culture from our guide. We explored the Tampa Bay History Center and learned even more about history and culture. High quality exhibits told the complicated violent story of European explorers and native Indians in a pretty balanced way. The explorers often faced similar odds of surviving as the Indians (the Narvaez expedition began with 600 men and only 4 survived). Centuries later, some of the Seminole people hid out in the swamps for decades, evading attack, capture, and deportation to reservations. 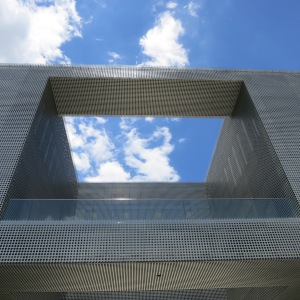 Tampa’s Museum of Art had fun modernist architecture, like this walkway and giant hole to the sky.

We also visited the neighboring town of St Petersburg, across the bay from Tampa. St Pete (as the locals call it) is charming. We saw old houses with large trees, well developed neighborhood communities, a high density of museums and other cultural centers, good restaurants and even a tasty chocolate shop. We enjoyed a free dinner at ‘Porch Party’ put on by the Museum of Fine Art and were awed by the scope of their collection (from all over the world, spanning centuries, and including many masters). We did laps and dives in the large municipal pool. We also visited the Gulf Beaches which were quite a bit tamer than the Atlantic beaches. White sand, calm warm water, a shallow bank. It was neat to see a nesting colony of  Black Skimmers and a large dolphin swimming in about 4 feet of water right through where we had been about 15 minutes earlier. 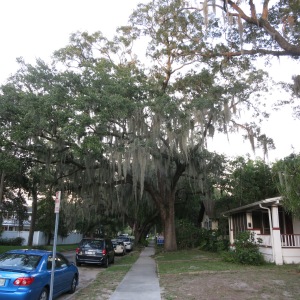 We stayed in this neighborhood in St Pete. Larger trees were draped in Spanish Moss.

You can see more photos from these adventures and others we didn’t write about here on the Pictures tab. 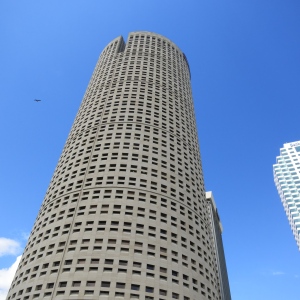 This is one of our favorite buildings in Tampa. The slot is on both sides, reminding us of an enormous regular screw. Note the osprey on the left. 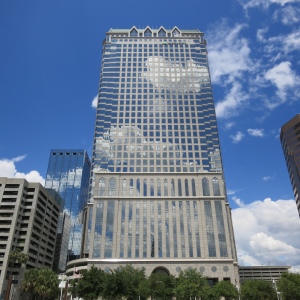 Another of our favorite buildings in Tampa (and reminded us of the building in downtown Portland with all the composers on it). Check out how the corners and reflections look like Xs. 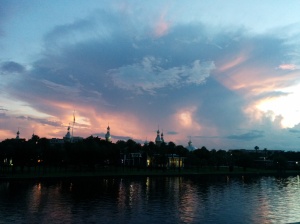 Sunset with a thunder cell in Tampa 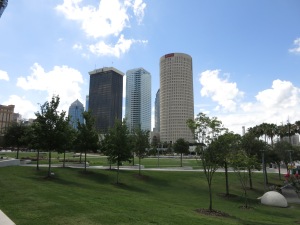 The thing with red pointy parts is a Spiny Orb-weaver spider. They are everywhere.

The town of Palm Beach hosts this beautiful living wall.

Wild airplants are common here but still feel like a miracle to discover. This one was right above the sidewalk and in full bloom.

One thought on “The adventure continues”