Sunset view from our rooftop over Marigot Bay

We are currently in St. Lucia (pronounced LOO-sha), which is 90 miles south of Dominica. It is similar to Dominica in many ways: climate, overall size, mountainous terrain, mixed historic influences, escaped slaves hid in the interior, small villages, dependence on tourism, subsistence living, minibus public transport, and strong Catholic and Rastafarian presences. There are differences: more flat land, more than twice the population, many resorts catering to weddings and honeymoons, cruise boats visit year round, more signs of large-scale industry and corporate presence, greater wealth and infrastructure, and good bays for shipping and freighter traffic. Despite an unemployment rate of 20%, we have found the people to be happy, generous, and smart.

The history of St Lucia includes some remarkable stories. The Kalinago people here also fought with the colonialists, at one point selling them tracts of land then driving them back to the sea. Ultimately, the Kalinago fled, died off, or were all killed. The French and British both wanted St Lucia and it swapped hands 14 times in 150 years ending under British control in 1814. The French Revolution brought emancipation to the slaves—many of whom joined the French army in fighting against the British. When the British retook St Lucia in 1797, many blacks refused re-enslavement, some joined a black British regiment, and were then “repatriated” to Africa. In 1979, St Lucia was granted independence and is still a part of the British Commonwealth.

The street view of our house in Marigot

We are staying in a little house on a ridge in the village of Marigot. Marigot Bay, visible below us, is a deep, hidden, natural harbor. It is considered a hurricane hole. In the 1700s, they say the entire British fleet hid from the French in the bay by covering the entrance with palm fronds. Once the French sailed by, the British sailed out and destroyed them from behind. More recently, parts of Rex Harrison’s Doctor Doolittle were filmed here in 1967. Our AirBnb is owned by a local woman and located in the heart of the village. Her family has something like 10 houses in a row and we are in one of them. We do our shopping at the minimart owned by her mom and are looked after by the extended family. Due to the close proximity of our neighbors, we can always hear a chicken, a dog, a car horn, a conversation, or someone’s music—sometimes all at once. Interestingly, country music is incredibly popular, so more often than not what is being played loudly is country. We arrived with a few days of showers which was a pleasant break but it has been hot and dry since. The northern third of the island is in a drought and currently has water restrictions in place. The rainy season begins in May/June normally, so it hopefully is coming soon.

On our second visit to the local beach Jim recognized one of the boats anchored as the one he most recently sailed across the Atlantic on (from Tenerife to St. Martin in November 2013). We were able to contact the the crew by email and arrange a get together. What a small world! The next day we had coffee aboard the Outremer 45. Crew and boat appeared to be in excellent condition all having recovered from their trans-Atlantic. We shared our travel plans and benefitted from their insight into European travel.

Jalousie Beach and Sugarbeach Resort. Petit Piton is in the background. Near the beach is a typical local boat. Most are named. This one, on the bow is labelled “Mother’s Blessing” and on the stern “I’m Sexy You Know It.”

In our time here, we have sought the ultimate snorkeling adventure, spending 2-3 hours in the water almost every day. We have found much joy in exploration and moving through the water, becoming stronger and sleeker swimmers. Topography above water becomes spectacular underwater and this coastline lends itself to caves, canyons, slots, blowholes and arches. Fish and coral are abundant and we have now become amateur experts at identification. Without an underwater camera or wanting to introduce ours to salt and sand, we have no pictures to share from these experiences. Some of the highlights include spotting a giant spiny lobster, being swarmed by curious Sergeant Majors, swimming with barracuda who were nonplussed to share the water with us, seeing flights of squid who let us circle and inspect them, chasing crabs, being included by small fish (one to four inches) in their schools apparently for their protection, seeing at least five types of eels, and getting dazzled by the iridescence of parrotfish, wrasse, damselfish, and many more.

We took a trip north to Rodney Bay. The majority of the people in St Lucia live there and it is the center for more affluent tourism, upscale resorts, and private villas. Seeing box stores, traffic jams, and so many white people, we felt like we were on a different island. We spent a morning walking the docks of the 280-slip marina and checking out boats. We walked around Pigeon Point looking at ruins and views from the forts used by pirates, the British, the French, and the Americans (in WWII). Then we got in the water, of course, and snorkeled along Pigeon Point.

We also rented a car for a few days in order to head south. Driving is on the left-hand side of the road so it was an adventure. Fortunately traffic was sparse and roads are rough so slow can be normal; we did fine. We traveled to places renowned for snorkeling. In St Lucia all beaches are public but resorts like to build along the best beaches, so we often had to walk through a resort, which was interesting and slightly awkward as we packed in our own gear, water, and lunch. We did have lunch one day a place called Boucan, Hotel Chocolat. Everything the restaurant serves has cacao in some form included. It was delicious! St Lucia’s most iconic image is that of two very steep mountains, called the Pitons. We succeeded in checking out the Pitons from multiple angles and swimming at the base of one. They are awesome, astounding peaks.

In early May we head to Florida. Reminder: when we create a new post, we also add photos to the “Picture” tab up above. Take a look!

Marigot Bay. Visible in the foreground is the inner harbor, where the British fleet successfully hid from the French in the 1700s.

Inside the Cathedral in Castries. The fluting and rosettes on the columns are painted. The walls and ceilings are covered with murals too. 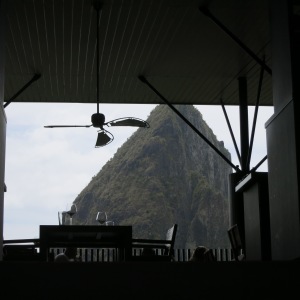 The first icecream truck that drove by our house. Note the cooler is a household chest freezer.

The second ice cream truck, which announced itself with the song Silent Night. Note it has two “portable” chest freezers and a shade roof.

Our neighborhood in Marigot. The two near houses both appear to be unoccupied at present. 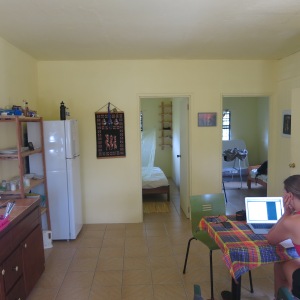 Interior view of our house in Marigot

Bay at Anse La Raye in the background