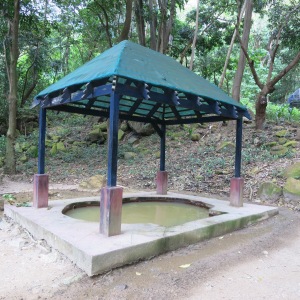 One of the man-made pools at Soufriere Sulphur Springs.

We have passed the halfway point of our time in Dominica and have a greatly increased fluency. We see familiar faces around the village. We understand bus etiquette and routes, we even know some of the drivers by their street names (yesterday we rode with “Ziggy”). We have our favorite vendor at the farmer’s market and know which grocery store sells honey, and which one has local produce. We understand that many restaurants have a menu that doesn’t correlate with what they have so it is best to ask before your heart gets set on something; we also expect that eating out will take at least 90 minutes and know to not wait for the bill as it may never come—go up and pay at the counter. We believe we understand the general weather patterns. We know where we can go to view wave conditions before we walk down to the beach to snorkel. In short, we are settling in. 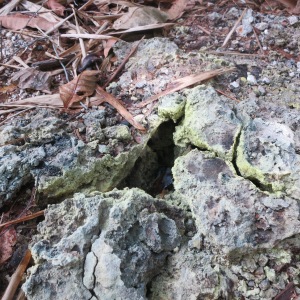 A steaming sulphur vent, you could not hold your hand directly over it or it would burn.

The next village over (Soufriere, named after the French word for sulphur) is home to hot springs. They have diverted a hot stream into a series of pools for soaking. Farther up the hill from the pools is a field of sulphur deposits, steaming ground that strongly smelled of sulphur and was colored yellow/white. No plants are able to grow in this superheated place. Despite the warm day, we followed the locals into a soaking pool and found it surprisingly enjoyable.

Our hosts manage a cottage that the last tenants left in a mess. We spent a day helping them work on it in preparation for rental again. We cleaned, painted, reattached boards, turned calabashes into lampshades, and learned about the challenges of DIY remodeling in Dominica. Several times we have snorkeled along the coast a distance of about a mile. There are two snorkeling/dive sites on either end of this stretch and five in the middle. The middle sites are not accessible by land. Going this distance has meant that we’ve gotten to see a ton of beautiful coral and fish while getting a good workout. To make this work, we carry water, snacks, and dry clothes in a drybag and tow it. At the far end is the most popular snorkeling site on the island: Champagne Reef. Just off the rocky beach, there are a lot of small volcanic vents that are always streaming a line of bubbles. They are particularly beautiful to swim in as the afternoon light cuts a steeper angle, turning each bubble into a prism. Not only can you see the bubbles but you can hear the vents through the water as you get closer and feel the water warmed from the vents. On one of these long snorkels we saw a lion fish. These are not native and are particularly destructive: they are tremendous eaters of fish, they multiply like rabbits, and are poisonous to the touch. We first learned about lion fish on Bonaire last year and knew that they are commonly hunted and any sighting should be reported. Communities who depend on reef tourism or fishing are particularly at risk of lion fish proliferation. 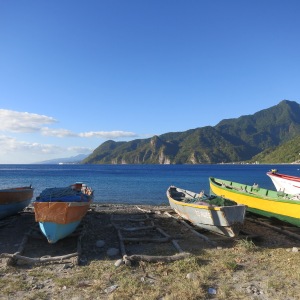 Fishing boats at Scott’s Head. On the far shore, you can see our snorkeling path. We started at the village on the right and went to the second to last ridge that drops down on the left (the one that drops at a gentler angle and is in a bit of a darker shadow).

We had a few fun days with another couple staying in Scott’s Head: Peter and Mieke from Bruges, Belgium. Mieke made the long snorkel with us while Peter was our generous chauffeur, simplifying the logistics considerably. We enjoyed swapping traveling stories and hope to visit them at home this summer when we are in Europe. 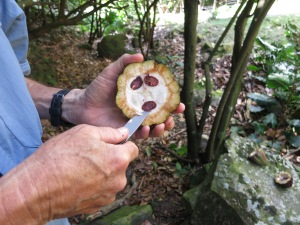 Cutting up a cacao pod trailside.

One of our accomplishments has been the harvest of wild cacao. On a recent hike, we came across a small grove of cacao trees with colored pods hanging on the trees and old pods littering the ground. We were able to knock down a few and enjoyed a fresh trail-side snack. On the “Pictures” tab you can see a series of photos we took of eating these pods. Inside the pod are seeds and fruit. The seeds have to be dried, fermented, roasted, and ground to create chocolate. However, there is a little bit of delicious fruit encasing each seed. It is a sweet tart white flesh. We even brought a couple pods home to enjoy the next day. Last week we travelled up to the northern end of Dominica. By bus, the journey took about 90 minutes with one transfer. Portsmouth is the second largest and oldest settlement in Dominica. We stayed in the next village south, Picard, which is unique because it is home to Ross University Medical School. The village is full of American students, brightly-painted apartment buildings, and food carts. We enjoyed the cheap meals, the fresh juice vendors, and hearing American accents. We spent a few quick days hiking, swimming, and visiting Cabrits National Park. The latter is home to a very well restored Fort Shirley. This was yet another fort that never saw an attack but was the location of a significant rebellion. In 1802, the 8th West India Regiment (all black soldiers) revolted against their oppressive white leadership. Although they lost the subsequent engagement with British regulars, the revolt contributed to the emancipation of blacks in the British Empire. 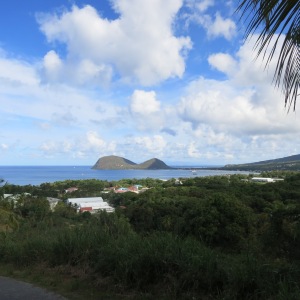 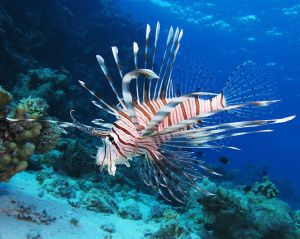 Lion fish (credit to Wikipedia for the picture) 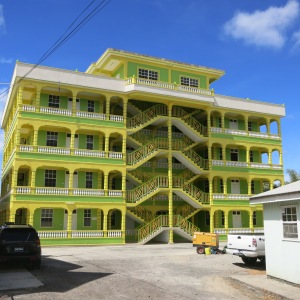 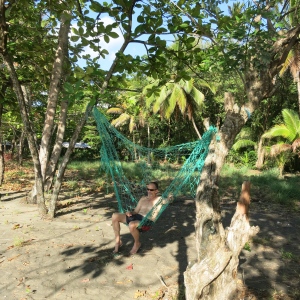 Jim relaxing on a fishing-net “hammock” someone strung up on the beach. 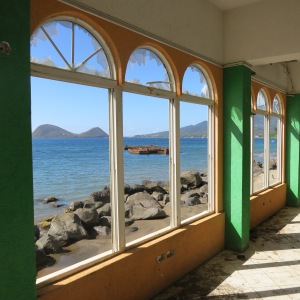 Evidence of past hurricanes is never far. Here is a destroyed abandoned hotel complex and a disintegrating barge to serve as a reminder. 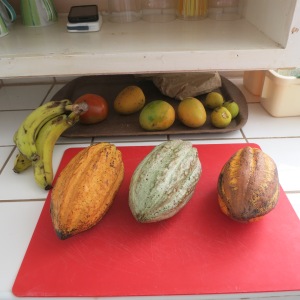 The cacao pods we brought home 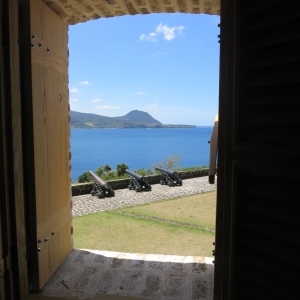 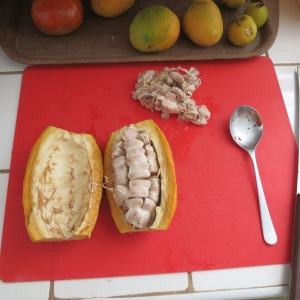 A cacao pod sliced open with the seeds inside. In the upper right are the seeds of another pod. 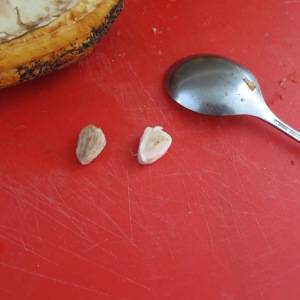 On the right is a seed with fruit around it, on the left it has been eaten off. 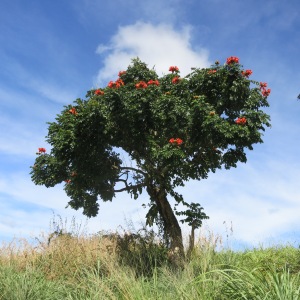 A flowering tree. These were all over the north of the island.

One thought on “Dominica continued”