We just finished 10 days in Old San Juan, Puerto Rico. Us and many other tourists. 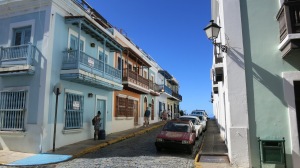 Old San Juan is on an island, with the heart of town being about 7 by 12 blocks. The oldest house was built in 1524 and is where Juan Ponce de Leon’s family lived for 250 years! The age of the city can be seen everywhere. The narrow cobblestone streets are paved with materials carried over as ships’ ballast in the time of colonization. Buildings are either turning to rubble or lovingly restored and painted vibrant pastel colors. In addition to nearly 500 years passing, these buildings have survived wars and hurricanes. We never tired of walking around and looking at the art of architecture: inviting balconies, hallways that allow a glimpse of a green dark interior courtyard, elaborate crown moulding, shuttered windows showing high-ceilinged indoor living spaces. Some buildings have collapsed to the point of losing their roofs; one was gutted completely and turned into a private park with exterior walls. Each open window or door provides a view into another world. 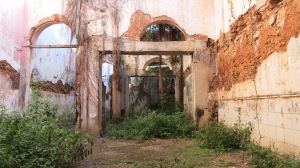 A building left to decay

San Juan exists where it does because it was a strategic location for the Spanish to control entrance to a large harbor that many boats used as the first or last stop in an Atlantic crossing for resupplies and fresh water. Ultimately, Puerto Rico and San Juan specifically were seen as the key to control of the Americas. To that end, the Spanish built heavy fortifications around the city. In fact, old San Juan is within the fort’s protective walls. We toured the two large forts on either side of old San Juan, both run by the National Park Service. They included tunnels, very thick walls, worn staircases, sentinel watchtowers, old cannons, musket demonstrations, and lots of other tourists.

One part of what we are doing with this year of travel is seeing if we can find a better place to live than Portland. San Juan is complicated. On the plus side, people are incredibly sweet and generous. It’s beautiful and the ocean is close by. We found public beaches we visited to be clean, have areas with lifeguards, have fresh-water rinse showers, and good snorkeling. The public buses are cheap at 75 cents a ride but it is nigh impossible to find a route map or schedule and it isn’t uncommon to wait an hour for a bus. Our guide book said Puerto Rico has more cars per square mile than anywhere in the world and we saw awesome traffic back-ups on the one-lane streets in San Juan. Despite the size and accessibility of old San Juan, pedestrians only get about 30 inches for a sidewalk. Tourists pour into San Juan via cruise ships a couple times a week. With two boats in, we found it hard to walk down the narrow sidewalks never mind get a table at a restaurant. It is great for the economy, provides many jobs, and momentarily lessens the quality of life for residents. Our Airbnb host told us that the country has an unemployment rate of 16%, that a majority of the population is elderly, and there are few job prospects outside San Juan. We attended a wonderful small farmers’ market with local produce, bread, and flowers. However, 80% of the food consumed on the island is imported; many plantations sit fallow. Two ways that San Juan is ahead of Portland are 1) banning smoking in public places and 2) creating a culture where people only take their dogs to places that are appropriate for dogs and always clean up after their dogs. In short, it is complicated; there is so much potential and those who are working for change sometimes battle “island time.”

Only about 20 vendors at this small weekly farmers’ market but it was bustling!

One of the highlights of our time in Puerto Rico was joining hundreds of families on the weekend to fly kites. Children were so excited they were running in circles and jumping for joy. Grandparents were teaching the art of getting and keeping a kite up. Parents brought picnics and spent the afternoon. Many kites were homemade from sticks, paper, and plastic. It was refreshing to see so many people partaking in one of the simplest joys. They didn’t need loud music, electronic toys, nor alcohol; this was good old clean family fun. We found an abandoned kite and Megan tried her hand at flying it. After the string broke twice, we realized why it had been left behind. In fact, many light poles were flying swaths of kite-less string; we weren’t the only ones who had a kite that got away. 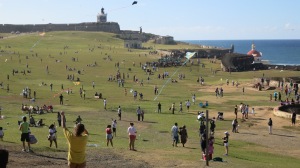 Cobblestones made from the materials in ships’ ballast many years ago

Relaxing in the shade

Our Airbnb was the top floor of this building. We ate dinner on the corner deck. 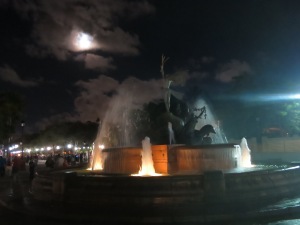 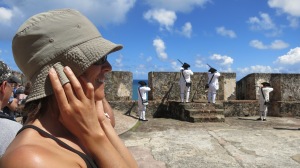 La Perla is an infamous slum in old San Juan. We found a sweet photography exhibit in their community center

View from our hostel balcony, the other place we stayed in old San Juan.

A sentinel post. See if you can find something fishy going on!