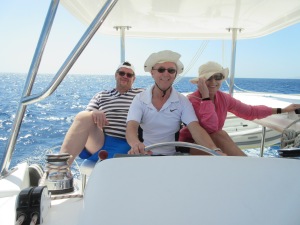 We recently got back from our last planned international adventure: a week-long sailboat charter beginning in Saint Martin. St.Martin, is 230 miles east of Puerto Rico and is a unique island because it is split between the Dutch and the French. It has the only airstrip in the smaller Caribbean islands that can support a jumbo jet. In fact, the beach is right at the end of the runway. Many tourists pose on the beach with a huge plane immediately overhead. You may have seen this sight on postcards, magazines or notorious YouTube uploads. (If you are looking for the next winners of the Darwin awards, a quick search will reveal some top contestants.) We did not visit that particular beach.

On board with us were our dear friends from Sweden, Sven and Eva, a good friend of their’s named Krister, Jim’s son Brian and 6-year-old grandson, Jackson. 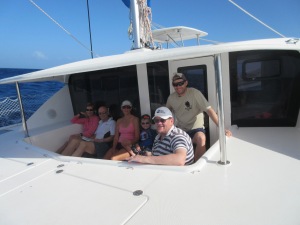 Almost every island in this part of the Caribbean is a different country, unlike our previous sailing trips, so we had the added complication of clearing immigration and customs several times. We visited Sint Eustatius (Statia) and Saint Barthélemy (St. Barth) and then returned to Saint Martin. St. Barth is known to cater to mega-yachts. Huge fancy power and sail boats were all around with large crews working the decks and garages in their hulls for jet skis and zodiacs. The port town of Gustavia is where today’s jet-set French go to see and be seen. Interestingly, especially for our Scandinavian friends, St. Barth was the only colony Sweden ever had. Gustavia is named after the Swedish King Gustav III and all the streets in town have both a French and a Swedish name. 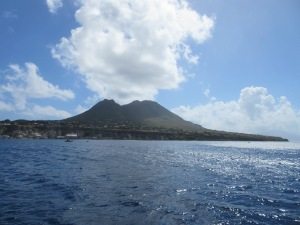 The jagged dormant volcano on Statia.

Unlike St. Barth, Statia is blue-collar, not frequented by tourists, and is a little rough around the edges. Historically, Statia was one of the busiest trade ports in the Caribbean and changed hands 22 times! In 1780, the British declared war on Holland and sent Admiral Rodney to claim Statia. The wealthy merchants and traders did not want to share their profit. Our cruising guide said they held many “funerals” burying coffins full of gold until Rodney caught wind of the scam. After British occupation, the island never returned to it’s full glory. A series of storms ruined the sea wall and warehouses right at water’s edge. Today, the rubble acts like an artificial reef and is a good place to snorkel. 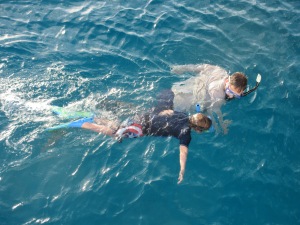 Snorkeling right off the boat.

If you have been following us all along, you know that we love to snorkel. The things that made this trip special were the predominance of turtles, barracuda hanging out under our boat, many colorful starfish, in addition to the wide variety of coral and fish. Jackson took to snorkeling in a big way, fearlessly exploring reefs and walls at every opportunity. Going snorkeling with someone for the first time heightened our joy and enthusiasm for the wonder of all that is underwater. 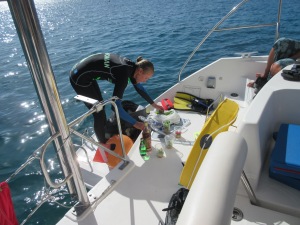 Mojito Woman setting up the bar.

One afternoon while anchored off Anse de Colombier (Saint Barth), a woman came swimming by with a large dry bag and a dive float. When I waved, she asked if I wanted a mojito! A minute later, she climbed up our swim ladder, hauled up her bag, and was taking orders. She and her husband are known as Mojito Woman and Mojito Man. They swim around busy harbors serving made-to-order mojitos. She closed the deal by offering non-alcoholic ones and a free one for Jackson. She pulled all the ingredients from her bag, including ice, fresh mint, fresh strawberries, lime wedges, and bottles of Perrier. They were delicious! Ten minutes later, she was back in the water and off to the next boat. 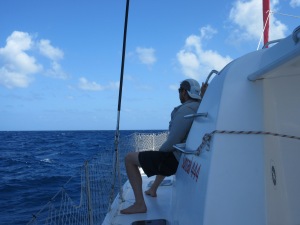 Enjoying the view and shade.

Aside from the unexpected mojitos, the other culinary delight we discovered was a new take on banana pancakes. The recipe is so tasty, easy, and healthy, you can find it below. 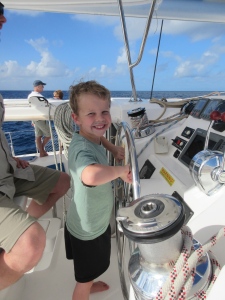 Captain Jackson at the helm.

As always, you can see more pictures from our trip by looking at the full gallery here or keep scrolling down and you can view the map here to brush up on your Caribbean geography. 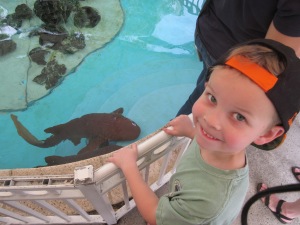 Jackson and some nurse sharks at a nature center. 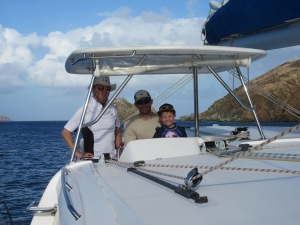 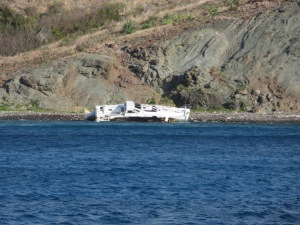 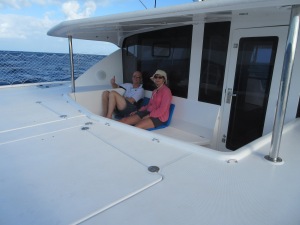 Sven and Eva in the forward lounge. 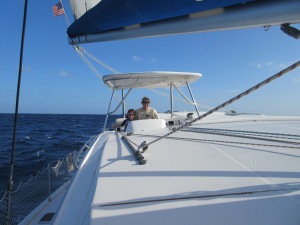 Jackson and Brian take the helm. 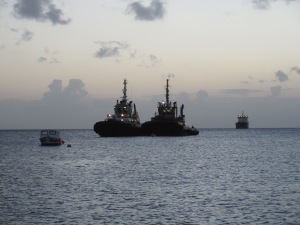 The waters around Statia are busy from a crude oil transfer station. These tugs fired up and went to work at night, near where we were moored. 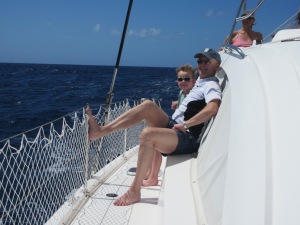 Jackson and Sven enjoying the sun, wind, and view. 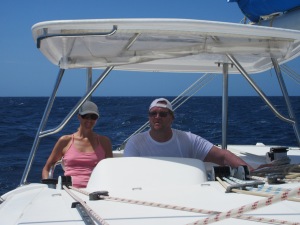 Megan and Krister. We alternated days at the helm. 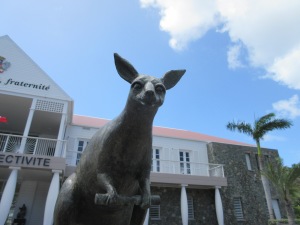 One afternoon Jackson borrowed our camera to take pictures of what caught his attention. This bronze sculpture in Gustavia is looking right at him. 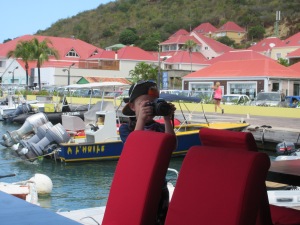 On a photo shoot with Jackson in Gustavia. 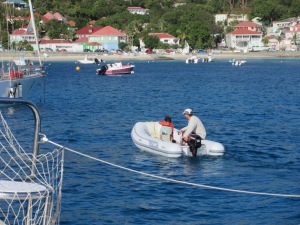 Jackson and Brian exploring from the dingy. Gustavia, St. Barth. 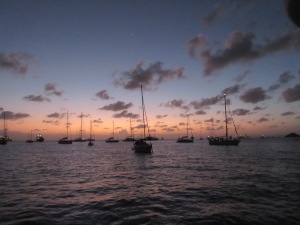 Sun setting over our night anchorage in Gustavia. 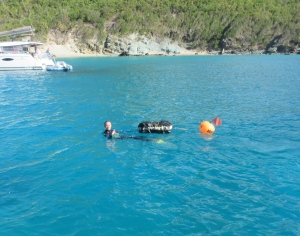 Mojito Woman in search of the next customer. 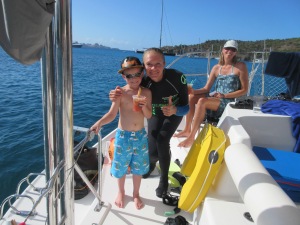 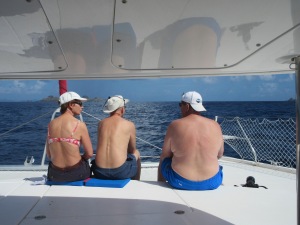 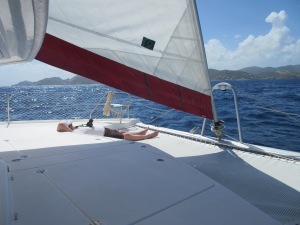 Krister in the groove. 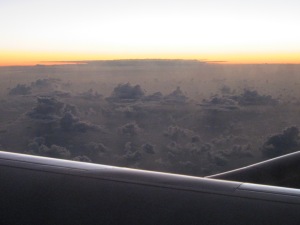