We had the great fortune to visit Bruges, Belgium. Bruges is a remarkably intact medieval city, recognized as a UNESCO World Heritage Site, and bustling with tourists all year long. Friends we made in Dominica, Peter and Mieke, generously offered to put us up at their house just outside of Bruges city limits. Bruges is a fantastic city and it was that much better to get insight and recommendations from our hosts. We stayed in their comfortable modern-feeling 20-year old house, with a beautiful garden that Mieke created, four cats (three of which are rescue cats), and their large dog named Bokito, after a notorious gorilla that escaped from a nearby zoo. Bokito, the dog, is intelligent, graceful, and well trained.

The Belfort. We climbed 366 steps to the viewing area which is in the openings above the clock face.

Peter and Mieke took time off work in order to show us around. The afternoon we arrived, Peter took us on introductory tour around Bruges. He works in the city center and showed us how town was laid out, the main sites, and the loveliest spots in a picturesque city. Peter pointed out that many of the old elaborate buildings are not churches. They were built for government or trade and are still used that way today. One example is the Belfort, a tower built as a trade center, now a museum, on the edge of the traditional market square. Together we climbed 366 stairs to the top to view of the city and the 47-bell carillon that plays every 15 minutes (see pictures of it here). The Belfort is about 800 years old and is leaning very slightly to one side because the foundation is built upon cowhides! 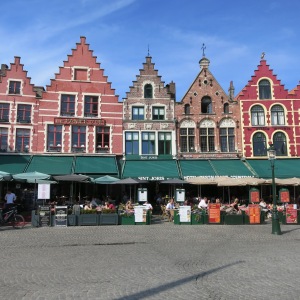 On the Markt Square, this row of cafes was perpetually busy.

In the city center, we spent another afternoon in the Groening Museum, which is renowned for their collection of “Dutch Primitives.” This is a group of painters who mastered oil painting, resulting in tremendous detail and realistic textures. Their paintings look 3-D and make you want to touch them. Such virtuosity seemed an odd use of the word “primitive.”

On two mornings, we joined the dog Bokito on his morning walk. Peter led the way for miles on an extensive system of public trails (some of which are shared with bicycles and others for pedestrians only). We passed through public and private ownership, woods and agriculture. It was a great tour of small farms, cows, horses and sheep, corn and pasture. Wonderful to have such peace and quiet close to the city! In the remnant of the morning mist and heavy dew, all the plants sparkled adding a fairy-tale feel. 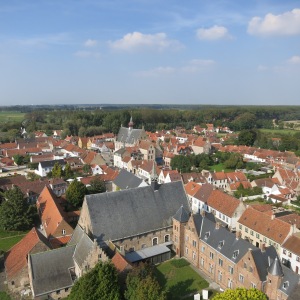 Peter and Mieke also took us on a countryside car tour one afternoon to visit several nearby towns and the coast. We drove along one of the many canals in the area lined with poplar trees all leaning in one direction from the prevailing wind. The lovely small town of Damme has cobbled streets, a crumbling church, and a moat with remains of a defensive wall in the shape of a star. To see what the star looks like, click here to open Google maps view. We stuck our toes in the cool North Sea at Knokke, and had a traditional dinner of muscles at a restaurant back over the border in the Netherlands. The next day on borrowed bicycles, we made a smaller tour around Bruges. It was such a delight to ride on flat land almost entirely on cycle-specific paths away from car traffic. The paths are well-traveled by other cyclists. 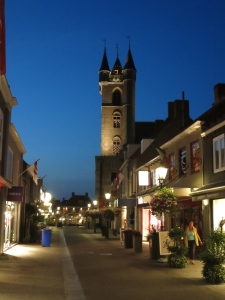 Evening in Sluis, Netherlands. Similarly in Bruges, the old buildings are well lit at night.

You can see some more pictures of our time in Bruges here.

Our first view of the old center of Bruges was looking across a canal with many of swans. 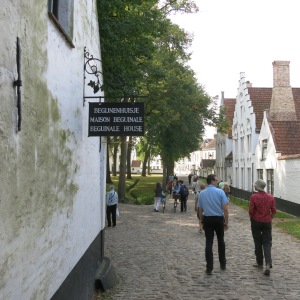 Peter and Megan walking into Begijnenhuisje. Like in Amsterdam, Bruges also has a community just for religious women but not as isolated as a convent. 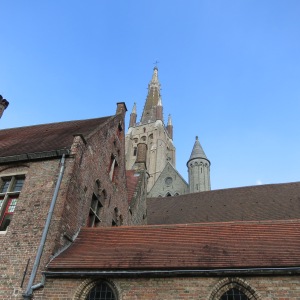 One of the beautiful spires in Bruges peaks over closer rooflines. 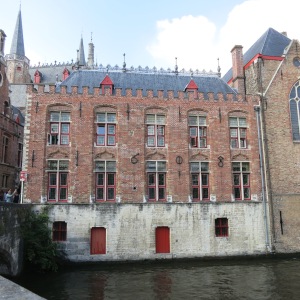 Many buildings have entrances on/off the canal like this one. Some also used wall ties to display the year they were constructed, 1608 for this building.

Peter and Megan walking down one of the old narrow lanes. 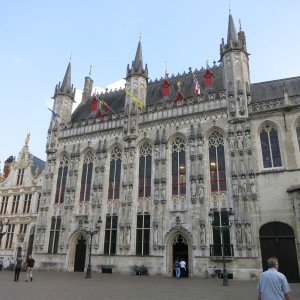 City Hall is an impressive building off a square in Bruges.

Busy street in Bruges. The 120,000 residents deal with over 3 million tourists each year. 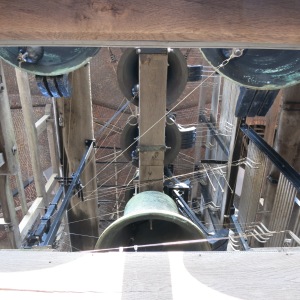 Some of the 47 bells that make up the carillon in the Belfort. Note all the wires that allow the bells to be played by a central keyboard. 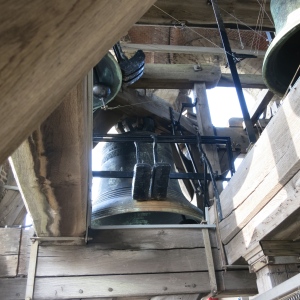 Carillon in the Belfort. See how the clapper has been pulled to the side and each bell has a couple of exterior hammers.

Detail of how the carillon is played. Sounds are produced either by a keyboard (shown as #1) or a large wheel similar to what you see in a music box (shown as #5). 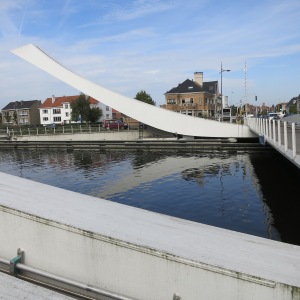 We biked by this in Bruges. The bridge lifts when the counterbalanced arms rock.

The rocking bridge. Note the rolling mechanism on the right side. 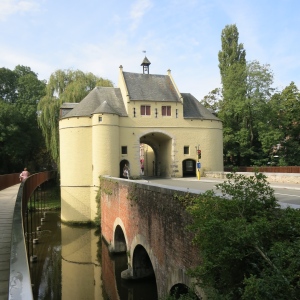 One of the medieval gates into Bruges. Note the pedestrian-only path on the left.

Us in a Bruges courtyard. Megan loved how colorful the bricks are: red, yellow, green, brown, white.

A quiet dead-end courtyard we stumbled into while exploring Bruges. 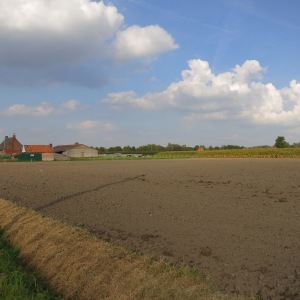 An example of the farmland around Bruges

A canal with a path for bikes and pedestrians. 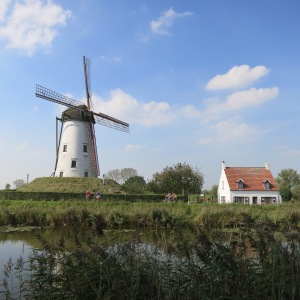 Old windmills dot the countryside. We didn’t see any that are still in use for their original intent. 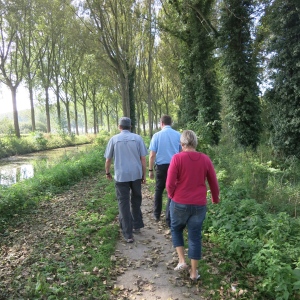 Peter, Jim, and Mieke walking on the outskirts of Damme.

View of one corner of the star-shaped moat around Damme, Belgium.

Beach at Knokke, Belgium. Large tides and shallow slope make for very long beaches. The green line across the foreground is part of a sand stabilization system.

A Dutch dike at the edge of the North Sea.

The high-speed train that took us to Paris.